The LiteVNA is a vector network analyzer based on the NanoVNA and SAA2. I also have a NanoVNA V2 so I thought I'd do a quick comparison.

Unfortunately the noise floor is a little higher than I hoped. Maybe I received a defective VNA, but the seller declared it normal and only pointed me to the documentation stating the noise floor can be higher when connected to USB. 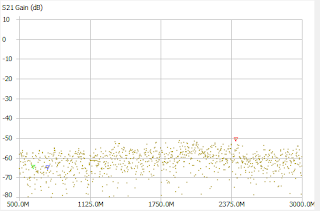 The S21 dynamic range appears to be 50dB which is a little lower than the 70dB specification below 3GHz. The specification probably assumes some averaging but I was not able to get it above 60dB even at 10 times averaging and very slow sweep speeds. The S11 trace also jumps around much more than my NanoVNA and NanoVNA V2.
For reference here is the noise floor of my NanoVNA V2(+4): 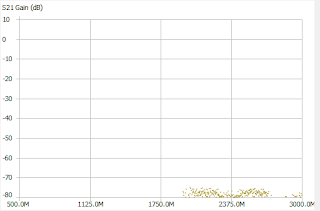 With a little averaging I was able to get the NanoVNA V2 dynamic range to the 90dB claimed on their website (https://www.tindie.com/products/hcxqsgroup/nanovna-v2-plus4/.)

Most NanoVNA software do not work with the LiteVNA so my only choice was NanoVNA-Saver. NanoVNA-App does not start on my computer and would crash as soon as I run it. NanoVNA-Saver is not completely stable. It occasionally freezes requiring a restart but I was able to get S11 data out of it just fine.
Although the specified sweep speed of 500 points/s should theoretically be faster than the 400 points/s of my NanoVNA V2, it took 5 seconds to do the same sweep that my NanoVNA V2 took 3 seconds to do. I have not investigated if this is software related.

The dynamic range is not as high as I would like and makes it unsuitable for tuning band-pass filters. The software is not polished but is adequate for hobby use.
Update: It appears others are having the same problem: https://www.youtube.com/watch?v=gT4x6wEG1B4